Being on crutches got you down? Here are some amazing feats that have been accomplished by people with their crutches. 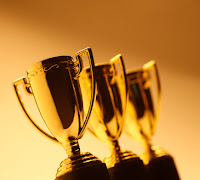 And, Sandford was not the first to hold the one leg record. Simon Baker completed a marathon with one leg and crutches in 6 hours and 47 minutes in 2008, smashing the then current record by 26 minutes.

After suffering two stress fractures in her leg during her 5-year run around the world, 61-year old Rosie Swale Pope completed her journey…on crutches.

This man crutched his way up the steepest street in the world, Baldwin Street in Dunedin, New Zealand.

After polio rendered him paralyzed from the waist down at the age of two, William Tan walked using his hands and dragging his feet because his parents were too poor to buy him crutches. He did this until the age of 10 when he was given an old pair of crutches. He later went on to pursue an Ivy League education, become a doctor, train at the world-renowned Mayo Clinic and became the first man in history to complete 10 marathons over 8 continents over 70 consecutive days.

So really, the sky is the limit – being on crutches doesn’t have to stop you from accomplishing anything. Tell us…what feat, large or small, do you (or did you) hope to accomplish while on crutches?
Posted by Mobi at 9:53 AM