Think the Hollywood elite wouldn’t dare to walk the red carpet with a pair of crutches? Think again.

After all of the splendor of this week's Emmy Awards, we thought it'd be fun to bring you this list of people who have made red carpet appearances with crutches:

Dot-Marie Jones (Coach Beiste) at the premiere of the third season of Glee last month.

Susan Sarandon at the New York City premiere of "You Don't Know Jack" in 2010.

Serena Williams on the "orange" carpet for the Miami Dolphins game November, 2010. 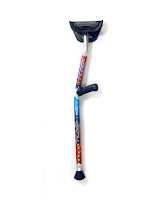 George Clooney's date, Sarah Larson, at the New York premiere of "Michael Clayton" in 2007, and George himself back in 1997.

Just because you're on crutches, doesn't mean you're not fabulous. Crutches can make quite a fashion statement, especially when blinged-out with décor or skins. Make your own unique red carpet statement and think about ways you can add some personality and fun to your crutches…and share your ideas with us in the comments below!
Posted by Mobi at 6:52 PM